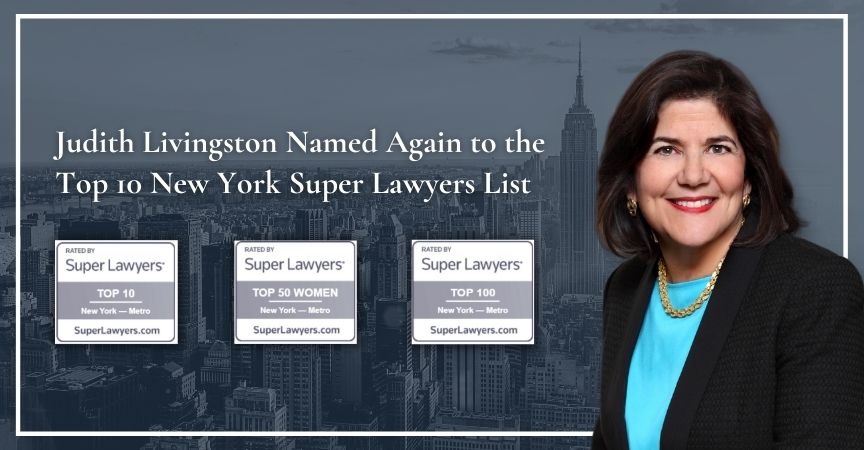 Judith was named New York Medical Malpractice “Lawyer of the Year” in Best Lawyers magazine in 2011 and 2013. She was cited as one of “40 lawyers who have made their mark in the area of health care law” by the National Law Journal and in addition to Super Lawyers is listed yearly by New York magazine as one of the best lawyers in New York and named as one of “the 50 most influential women lawyers in America.” She is also listed as one of the country’s top lawyers by Law Dragon.,

Judith is recognized by Super Lawyers for her specialties of medical malpractice and personal injury and her experience in handling matters involving birth injuries, brain injuries, construction accidents, wrongful death, and more. She represents personal injury clients throughout all five New York City boroughs as well as in the Long Island, Westchester and Rockland County regions.

Super Lawyers, part of Thomson Reuters, is a rating service of outstanding lawyers from more than 70 practice areas who have attained a high degree of peer recognition and professional achievement. Each year, no more than five percent of the lawyers in the state are selected by the research team at Super Lawyers to receive this honor.

The annual selections are made using a patented multiphase process that includes a statewide survey of lawyers, an independent research evaluation of candidates and peer reviews by practice area. The result is a credible, comprehensive and diverse listing of exceptional attorneys.