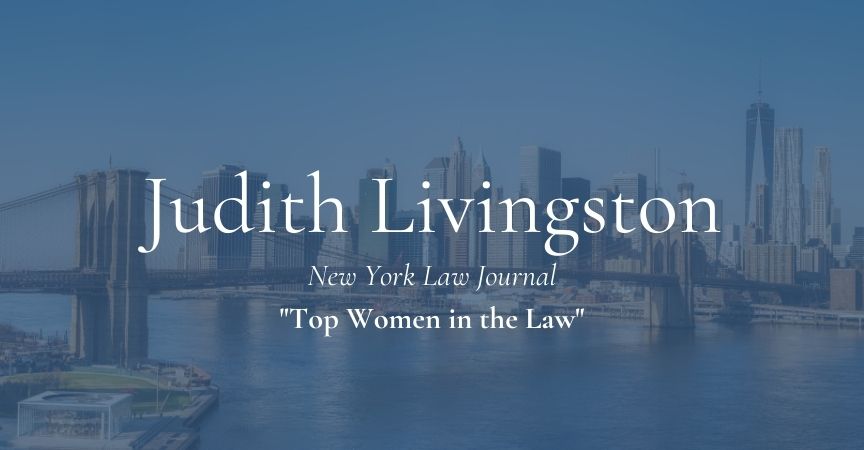 Judith Livingston, New York personal injury lawyer, was featured in the “Top Women in the Law” edition of the New York Law Journal.

Reserved, methodical and precise, Judith Livingston has been called “A Legal Legend” by Law Dragon and named one of “The 50 most influential women lawyers in America” by New York magazine. She was the first female and youngest member, now the current Vice President, of the Inner Circle of Advocates, an invitation-only group limited to 100 of the best plaintiff lawyers in the United States who possess exceptional qualifications, are experienced and skillful in the handling of courtroom litigation, and who are respected among their peers.

In the feature, Judith was asked a series of questions such as what she would be doing if she were not a lawyer, who her mentor is, and the best advice she has been given. She also discusses how, as a female lawyer, she’s been treated differently and what the legal profession could do to improve opportunities for women.

“Provide equal pay to women and equal opportunity at the top ranks. Allow women time off for children without any penalty, blatant or secret. And most importantly, offer a level playing field, where respect is equal to the lawyer’s talents and abilities, without consideration to gender.”

Judith is proof that gender does not define your success in male-dominated professions. As partner at Kramer, Dillof, Livingston & Moore since 1989, she has won 35 trials with verdicts in excess of $1 million and has negotiated hundreds of settlements that have resulted in payments to her clients of almost a half-billion dollars. To read more about Judith Livingston and her successes, click here.