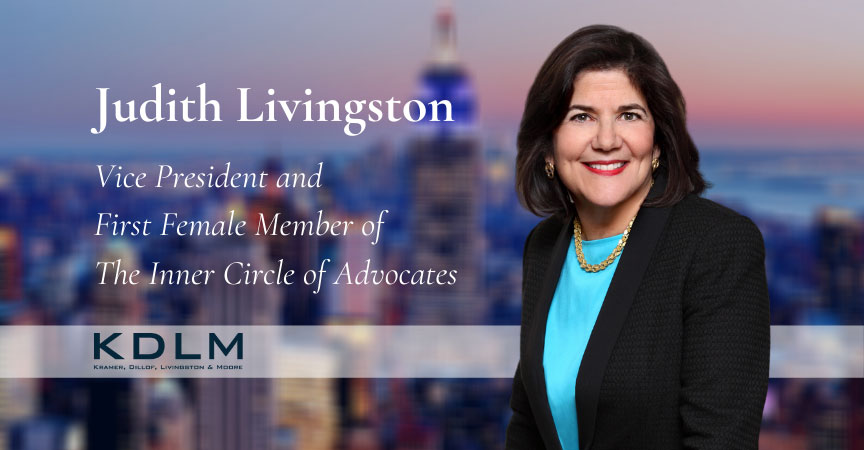 Judith A. Livingston, senior partner of Kramer, Dillof, Livingston & Moore (KDLM) is one of the most successful plaintiff’s attorneys in the US. She has won 35 trials with verdicts in excess of $1 million and has negotiated hundreds of settlements that have resulted in payments to her clients of almost a half-billion dollars.

She is the current Vice President of The Inner Circle of Advocates, an invitation-only group limited to 100 of the best plaintiff lawyers in the United States. 2020 marks her 30th anniversary with The Inner Circle of Advocates. The group only admitted male members until 1990, when she became the first female member. She was also among the youngest to be invited. Members of the Inner Circle are close-knit professional colleagues that often function as a collective law firm sharing experience, knowledge, and skill, despite being spread across the country. An Inner Circle Member must have at least three verdicts of one million dollars or a recent verdict in excess of ten million dollars.

Some of Ms. Livingston’s landmark verdicts include:

Ms. Livingston specializes in medical malpractice and personal injury cases. Among her many honors, she has been called “A Legal Legend” by Law Dragon and named one of “The 50 most influential women lawyers in America” by New York magazine.

If you are seeking legal representation in New York for medical malpractice, personal injury, product liability or wrongful death, schedule a consultation contact our personal injury lawyers online or call (212) 267-4177.