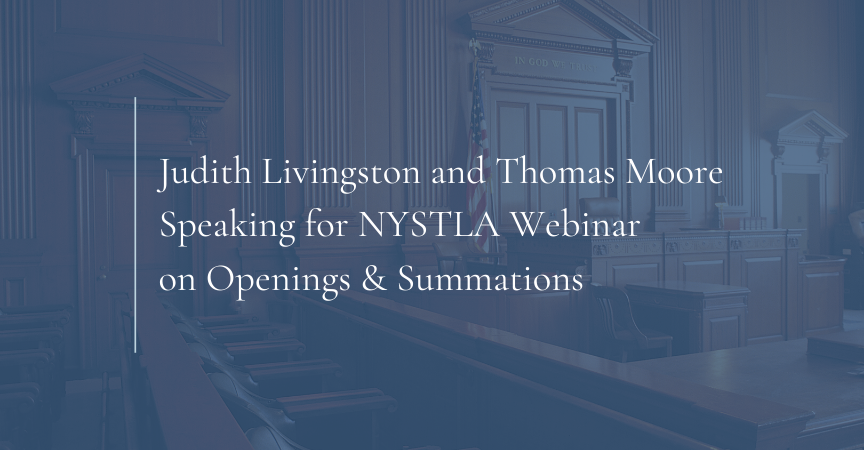 Judith Livingston will be co-chairing and serving as faculty the New York State Trial Lawyers two part Series: Openings & Summations May 26 and June 1, 2020 | 12:00PM – 2:00PM. Thomas Moore is faculty for the Summations part of the series on May 26th.

Judy and her co-chairs have assembled an All-Star panel of Trial Attorneys who will demonstrate what they do and say in Opening Statements and Closing Arguments to achieve spectacular results. Trial demonstrations are what this program is all about. Each member of the faculty will demonstrate an opening or summation.

The mission of the New York State Trial Lawyers is “To promote a safer and healthier society, to assure access to the civil justice system by those who are wrongfully injured and to advance representation of the public by ethical, well-trained lawyers.”

This seminar has been approved for transitional & non- transitional credits. This webinar is free for all NYSTLA members. Registration is required in advance. 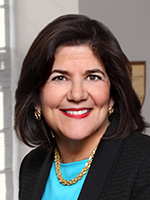 Judith Livingston is a senior partner at Kramer Dillof Livingston & Moore, and, according to Lawdragon one of the “Most influential Plaintiffs’ lawyers in the history of American law.” She has also been called “A Legal Legend” and named one of the “50 most influential women lawyers in America” by New York magazine. Ms. Livingston has won 35 verdicts in excess of a million dollars and has negotiated settlements of multi-million dollars in several hundreds of cases involving car and train accidents, general negligence, medical malpractice and labor law. CNN has called her “The Queen of Torts”. Ms. Livingston is the first woman in the United States invited to join the Inner Circle of Advocates and will be the next president of this national organization. She is included annually in the Top 100 New York lawyers by Super Lawyers and repeatedly as one of the “top 50 women lawyers” in New York. 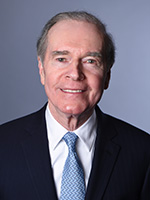 Tom Moore is a senior partner at Kramer Dillof Livingston & Moore and one of the best trial lawyers in the United States. He has been named by the National Law Journal as the “Lawyer of the Year” twice. Tom has been named by NY Super Lawyers in the top 100 every year since its inception and several times named to their list of Top 10 Lawyers in New York. Tom has 92 verdicts over a million dollars, including 50 verdicts over $10 million and four verdicts over $100million, including verdicts for $109million, $120million, $130million and $170million. Additionally, he has negotiated hundreds of multimillion settlements in excess of one million dollars in car, truck and train accidents, labor law and medical malpractice. Tom has been named to the Hall of Fame by American Legal Media and by Lawdragon.