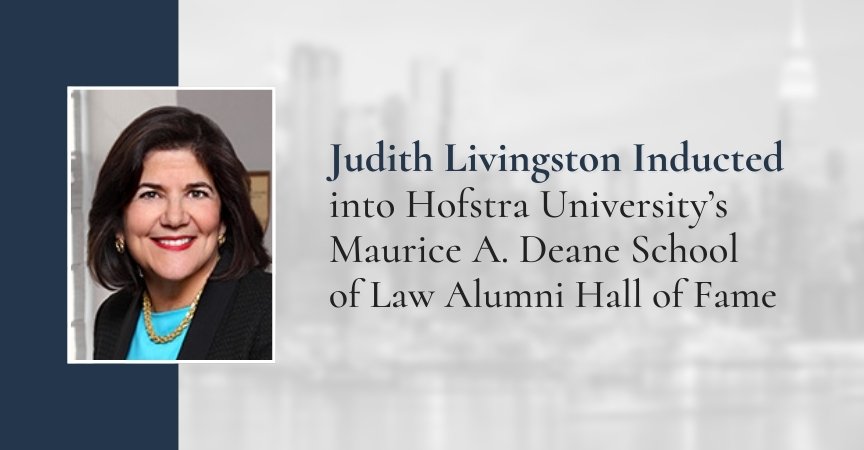 The Maurice A. Deane School of Law at Hofstra University celebrated its 50th anniversary on Tuesday, April 5th, inducting fifty alumni and sixteen “distinguished alumni” into its inaugural Hall of Fame. 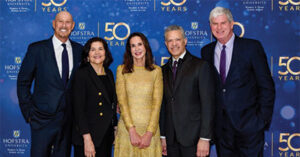 Judith Livingston, senior partner at Kramer, Dillof, Livingston & Moore, a member of Hofstra Law’s class of 1979, was one such inductee. The honor recognizes “alumni whose exemplary careers or extraordinary service to the betterment of society, or outstanding contributions to the law school have significantly impacted the Hofstra Law community and beyond.”

Judith is an award-winning medical malpractice and personal injury attorney in New York City with decades of experience and success behind her. In 2014 Hofstra University honored her with the Presidential Medal which is awarded to “distinguished persons in recognition of outstanding career achievement and professional leadership.”

Dean of Hofstra Law, Judge Gail Prudenti, announced at the event that the school had raised over $20 million as part of its Vision 2020 Campaign, well exceeding its initial goal of $12.5 million. Prudenti cited the impact the school’s alumni had on the fundraising campaign, which will go to extending scholarships to students, developing programs in legal technology, as well as classroom technology.

This year’s Hall of Fame inductees were selected through a multi-step process that included peer nomination and a committee decision by a panel of Hofstra Law alumni, faculty, and administrators.

Congratulations on this wonderful honor, Judith!