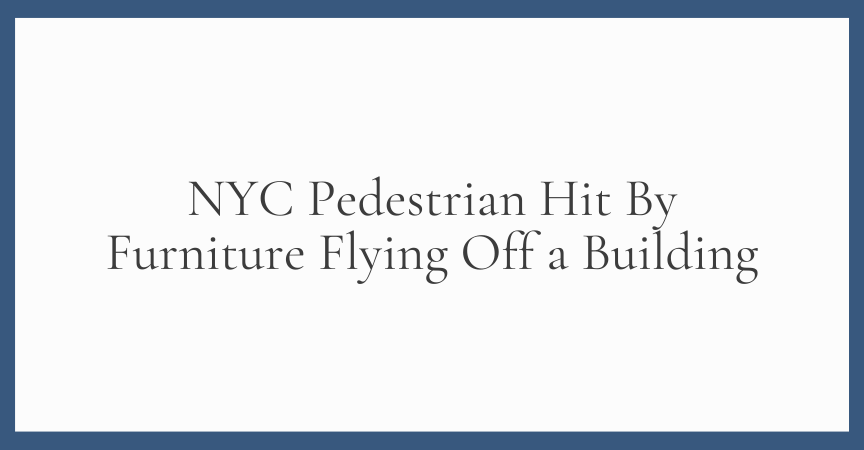 Strong winds on Saturday, January 25th, 2020 blew a piece of patio furniture off a balcony in Manhattan, injuring a 23-year-old woman and damaging a parked car.

According to the New York Post, the storm blew a wooden lawn chair and its cushion from the 12th floor of 15 Union Square West, hitting the woman in the head and knocking her unconscious. Onlookers said it sounded like a truck hit the sidewalk.

“She was passed out, and then people thought she was dead,” said Terry Williams, who witnessed the incident. “Then all of a sudden she started screaming like she woke up and she was in a panic.”

The woman suffered a laceration to the head and was taken to Bellevue Hospital, where she is expected to survive.

The risk of objects flying from buildings is a threat to New Yorkers’ safety every day. Often these incidences are the result of bad weather, as was the case in another recent situation, where a woman suffered traumatic brain injury (TBI) after being hit by ice that fell from a building. KDLM is currently handling that case.

But bad weather isn’t always to blame. In 2018, a jury awarded $45.2 million to a 53-year-old philanthropist after she was hit by a shopping cart tossed by teenagers from the roof of an East Harlem Target store in 2011. She suffered severe brain injuries. She and her family sued Target, the mall, and the security company for negligence, alleging the businesses had ignored similar incidences in the past.

As New Yorkers, we must all work together to protect our pedestrians and ensure our city remains a safe place for citizens to move through each day without fear of injury. Accidents happen, but so often, they’re the result of others’ negligence and carelessness. KDLM is dedicated to taking on cases like these to ensure the victims receive the compensation — and peace of mind — they rightfully deserve. If you have suffered an injury because of someone else’s carelessness with their property, please reach out to us today to discuss your case.