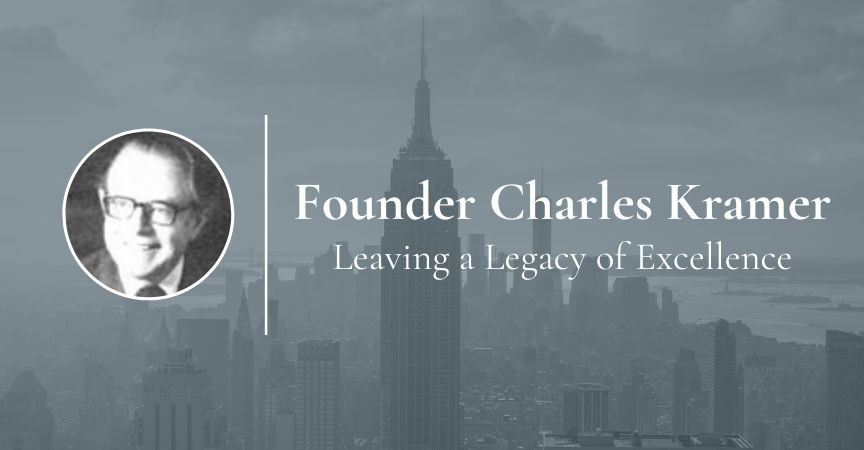 Our Founder and Legacy – Charles Kramer


Charles Kramer decided to build his own law practice in 1940 when he was a young lawyer after leaving the employ of Harry Gair, a prominent New York City personal injury lawyer. For several years he honed his craft on his own. Then, in 1944, he hired Henry Dillof, a young man who had just been honorably discharged from the Marine Corps, as a law clerk preparing for the Bar exam. Two years later, Henry passed the Bar and became Charlie’s Associate. And in 1950, they formed the firm of Kramer & Dillof.

Over the next 25 years, as other attorneys joined the partnership, the firm’s reputation for excellence grew nationally, particularly in complicated medical malpractice cases.

In 1978, a young attorney joined the firm as partner: Thomas A. Moore.

“When I met Charlie Kramer in 1978 he was a living legend. He was literally a pioneer in medical malpractice litigation, an extraordinary trial lawyer, a true gentleman, and a consummate teacher. To truly understand Charlie’s gift, you would have to meet him. He was diminutive and soft-spoken, but uttered his words with pristine clarity and in commanding fashion. The secret to Charlie’s success as a trial lawyer was that he always made himself the least important person in the courtroom. The focus of the jury was on anything but him. This would enable him to make a powerful point in the most subtle manner, leaving an overwhelming impression on the jury. It was as if they wanted to make sure that he understood the significance of what he had just elicited from the witness. His inimitable style made Charlie a master at cross-examination.”

Charles Kramer passed away in March 1988, and the torch was passed to Tom Moore, who became senior partner. The values Charlie Kramer espoused are still evident in everything the firm does today.

The attorneys at Kramer, Dillof, Livingston & Moore (KDLM) are regularly recognized and honored by their peers. But it is the dedication to our clients that is the hallmark of our practice.

Success for our clients requires relentless preparation and intimate knowledge of the law. It requires experience and financial resources to fully investigate, research and prepare every case we take on, from beginning to end. We are committed to that effort and dedicated to working on behalf of our clients.

KDLM prides itself on giving each case the complete attention it deserves and requires at every step of the legal process. Our firm has won over 150 verdicts of over $1 million for clients and has negotiated settlements on behalf of clients in excess of $1 billion.

“There is an absolute commitment to excellence, to integrity, and to respect that permeates everything we do,” says Partner Matt Gaier. “The preparation and trial methods that Charlie Kramer pioneered are timeless. We serve the law and our clients with the highest ideals and most effective representation. It is a legacy of which we can be very proud.”