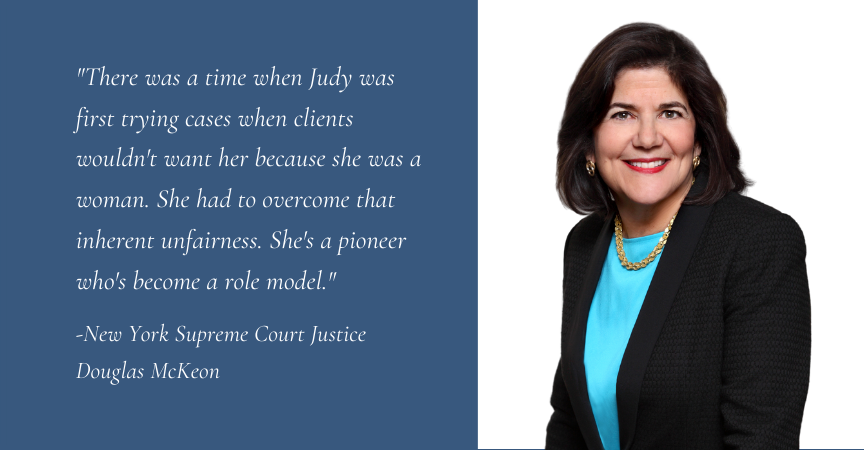 Judith Livingston has become one of the most successful plaintiff’s attorneys in the United States and is a role model for other women lawyers. She has overcome the inherent unfair view of women lawyers because of her hard work ethic and determination.

“There was a time when Judy was first trying cases when clients wouldn’t want her because she was a woman. She had to overcome that inherent unfairness. She’s a pioneer who’s become a role model.”
– New York Supreme Court Justice Douglas McKeon

Reserved, methodical and precise, Judith Livingston has been called “A Legal Legend” by Law Dragon and named one of “The 50 most influential women lawyers in America” by New York magazine. She has been a partner at the law firm of Kramer, Dillof, Livingston & Moore since 1989.

Ms. Livingston has won 35 trials with verdicts in excess of $1 million and has negotiated hundreds of settlements that have resulted in payments to her clients of almost a half-billion dollars. She specializes in medical malpractice and personal injury cases.

She is the current Vice President of the Inner Circle of Advocates, an invitation-only group limited to 100 of the best plaintiff lawyers in the United States who possess exceptional qualifications, are experienced and skillful in the handling of courtroom litigation, and who are respected among their peers. She was the first female, and youngest member invited to be a part of this prestigious organization.

Judith Livingston is an example to all women that becoming successful in a predominately male-dominated workplace is more than possible. Read more about her success here.