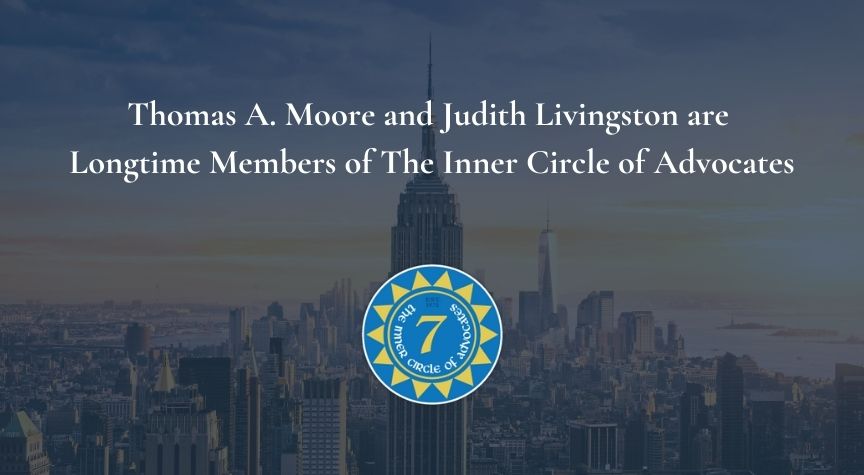 KDLM senior partners, Thomas A. Moore and Judith Livingston are both members of the elite trial attorney’s group, The Inner Circle of Advocates.

The Inner Circle of Advocates is an invitation-only group limited to 100 of the best plaintiff lawyers in the United States. Members of the Inner Circle are close-knit professional colleagues that often function as a collective law firm sharing experience, knowledge, and skill, despite being spread across the country. An Inner Circle Member must have at least three verdicts of one million dollars or a recent verdict in excess of ten million dollars.

Judith Livingston and Thomas A. Moore are among the most successful and respected trial attorneys in the country. They have won more than 120 verdicts over $1 million, and negotiated settlements on behalf of their clients in excess of $1 billion.

Both Livingston and Moore are listed in the highly respected Best Lawyers® publication The Best Lawyers in America© and have been included year after year as part of the top 500 lawyers in the country by Law Dragon.

Moore was named the National Law Journal’s “Lawyer of the Year” not just once, but twice. And he has been named to the “Top Ten” list of attorneys in New York multiple times in the last dozen years. Livingston has been called “A Legal Legend” by Law Dragon and named one of “The 50 most influential women lawyers in America” by New York Magazine.

We are proud of our senior partners’ continued recognition for their success as New York City personal injury lawyers.