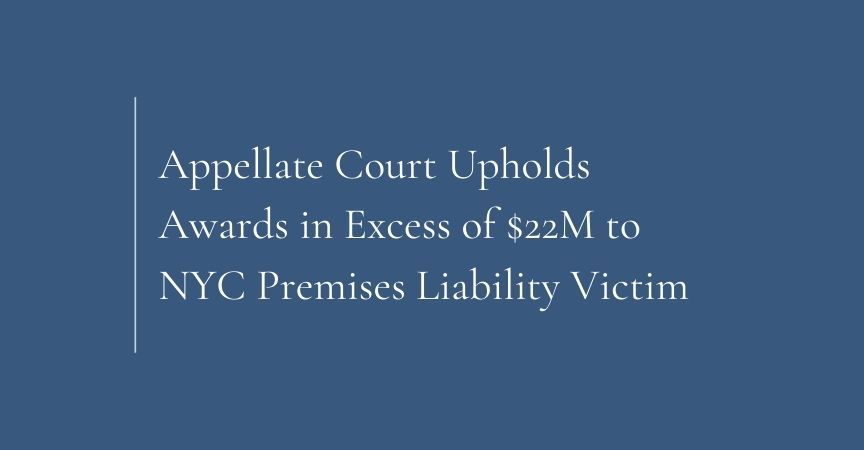 56-year-old Marion Hedges, her husband, and her son have, together, been awarded $22,275,500 for a 2011 incident at the East River Plaza Mall in Harlem that nearly killed her and caused brain injury.

Hedges and her son were shopping for Halloween candy for underprivileged kids when two twelve-year-olds threw a shopping cart over the railing of a fourth-floor landing. The cart, which fell 79 feet, hit Hedges, knocking her to the ground and critically injuring her. Her son was standing nearby but was physically uninjured. The incident caused brain damage, resulting in cognitive deficits, limited vision, and difficulties with balance, coordination, and speech, as well as incontinence and an inability to control strong emotions.

KDLM’s Thomas Moore, who tried the Hedges case to verdict, called the accident “avoidable” in 2018 during opening statements in Hedges’ Manhattan Supreme Court negligence trial. Moore also suggested that had the mall’s owners and its hired security team observed even the most basic security measures, the accident would never have taken place.

An official order from the Appellate Division this week affirms that point: “The jury heard evidence that the Owner Defendants had notice of a recurring hazardous condition at the premises, namely that youngsters frequented the location and threw various items off the elevated structure.”

Witnesses said they had previously seen young people throw candy, glass bottles, rocks, and garbage over off the elevated structure. Additionally, documentary evidence from 20 days before Hedges’ injury showed that youths had thrown a shopping cart down an escalator at the mall.

“The area had been hazardous for too long—making a tragic event not only probable but inevitable,” Moore told Best Lawyers in 2019.

Despite these known hazards, mall owners failed to take reasonable measures to make their property safer, such as raising the height of the rails, increasing security, or even posting warning signs on the premises. The incident is a classic case of negligence on the part of the property’s owners that led to needless and life-altering tragedy for the victim and her family.

While a jury originally awarded the plaintiffs $45.2 million in 2018, the reduced awards upheld on appeal this week included $10 million for Marion Hedges’ future pain and suffering, which, combined with $3 million for past pain and suffering, totaling $13 million, is the second-highest amount ever sustained by the Appellate Division in New York State for pain and suffering.  It also included $2 million for her husband’s loss of consortium, which is the highest sustained amount ever reported in an Appellate Division decision in New York State for such damages. The judgment also included $2.2 million to Hedges’ son for his emotional distress from being in the zone of danger.

Verdicts such as the one in the Hedges case are important because they help to hold property owners and the third parties who work with them accountable for what happens on their land. All Americans have a right to safely visit public spaces for shopping, eating, visiting, and other aspects of daily life. If property owners fail to take the necessary measures to ensure that safety, they must be held responsible when tragedy strikes.