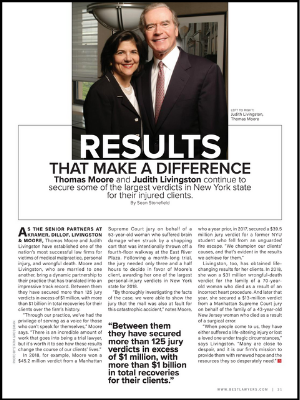 Senior Partners Thomas Moore and Judith Livingston were highlighted in the article “Results That Make a Difference.” They bring a dynamic partnership to the practice which has resulted in an impressive and successful track record, securing some of the largest verdicts in New York State for their injured clients. Between them, they have secured more than 125 jury verdicts in excess of $1 million. One of the many notable verdicts Moore obtained was on behalf of a 53- year-old woman who suffered brain damage when struck by a shopping cart that was intentionally thrown off a fourth-floor walkway at the East River Plaza. Moore took on this case and following a month-long trial in front of a Manhattan Supreme Court jury, the woman was awarded one of the largest New York personal injury verdicts in 2018 – $45.2 million. Livingston has also obtained life-changing results for her clients. In 2018, she obtained a $31 million wrongful-death verdict for the family of a 70-year-old woman who died as a result of an incorrect heart procedure.

“We champion the clients’ causes, and that’s evident in the results we achieve for them.” – Thomas Moore 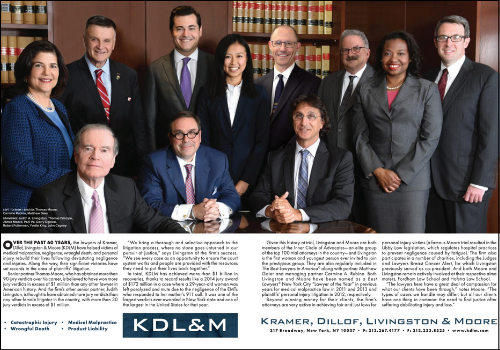 KDLM’s New York personal injury lawyers have helped victims of medical malpractice, negligence, wrongful death, and personal injury for over 60 years. As a result of being very selective with the cases they choose, the firm has been able to give each case the best possible opportunity for success, achieving record results, and more than $1 billion in recoveries.

In 2014, KDLM obtained the largest verdict ever awarded in New York state and one of the largest in the United States of $172 million for a case where a 29-year-old woman was left paralyzed and mute due to the negligence of the EMTs who responded to her mother’s 911 call.

In addition to winning victories for their clients, KDLM’s attorneys are also very active in achieving fair and just laws for personal injury victims, such as the Libby Law which resulted from a famous Thomas Moore trial. This legislation regulates hospital practices to prevent negligence from fatigue. The firm also gives back and helps the local New York community through sponsorships, volunteer work, and donations. Read more about the charities KDLM proudly supports.