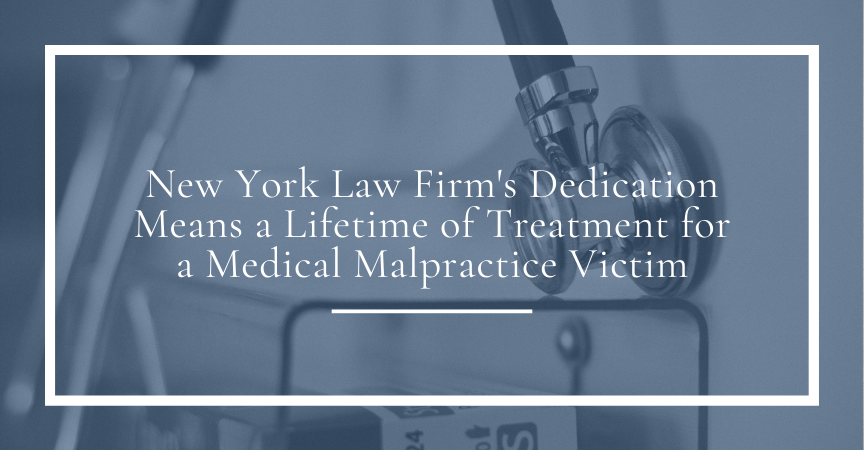 Shannon Reilly was born Nov. 1, 2002 with cerebral palsy, a disorder that affects a person’s ability to move and perform basic motor skills. It is the most common motor disability of childhood, according to the CDC, and is usually linked to brain damage that occurs before or during a birth.

Shannon’s parents, Danni and Frank Reilly, claimed that their daughter’s delivery was improperly managed at St. Charles Hospital and Rehabilitation Center, leading to a hypoxic event that caused the brain damage and cerebral palsy. “[Shannon] cannot walk and she cannot speak,” KDLM Senior Partner Thomas Moore told the New York Daily News in 2013. He added that “she hears and understands and is exquisitely aware of everything that is going on around her,” making her something of a prisoner in her own body.

When the case went to trial, the defendants offered the family $8 million to settle it. “That included all damages, including the child’s future care,” KDLM Partner Matthew Gaier explained when interviewed for this post. In reality, the $8 million would not even come close to covering the expenses the family would need over time.

Moore advised the family to reject the offer. Unfortunately, the jury ruled in favor of the defendants and determined that the Reilly family should receive nothing. Moore and Gaier appealed the ruling, and in February of 2011, a New York State appellate court reversed and ordered a new trial against the hospital on the ground that the jury’s verdict was against the weight of the evidence.

Later that year, an important change occurred in New York law. A statute was passed under which children with birth-related neurological injuries can no longer receive monetary payments from defendants for their future care requirements. Instead, the New York Medical Indemnity Fund (MIF) was established to pay for that care directly, but only where a plaintiff has obtained either a jury verdict or a settlement in a lawsuit. In other words, future care is paid for by a state fund if the plaintiff is awarded a verdict or a settlement.

Moore tried the Reilly case for the second time in 2012. After a lengthy trial with numerous witnesses, that trial ended in a hung jury. Moore then tried the case for a third time in 2013. This time, the jury ruled in favor of the plaintiffs, awarding Shannon $129 million. The verdict was then reduced by the trial court and on an appeal by the hospital to the appellate court. In the end, the plaintiffs were paid $13.6 million in cash, and Shannon was placed in the MIF, which is obligated to pay for her health care needs for the rest of her life. Gaier noted the monetary payment by the hospital combined with the care being paid for by the MIF makes the result “worth as much as four 4 times the $8 million settlement that had been rejected.”

The Reilly case underscores an important lesson in the world of litigation: passion, commitment, and perseverance are critical to obtaining the best results possible for the client. That is true not only of the monetary sum the Reilly family received but also in the sense of justice and closure they get after a decade of agony.

In 2020, as we navigate uncertain times centered on a global health crisis, it is important to remember that everyone deserves the best possible treatment when it comes to health care. If you fall victim to negligence or substandard medical care, know that there are those willing to fight for you over the long term to see justice delivered.

If you have a personal injury claim that you would like to discuss, contact us at (212) 267-4177 or fill out this online form to request a consultation.